All about Anthurium pot plant and cut flower

The name says it all

The genus name Anthurium is derived from the Greek ‘Anthos’ and ‘Oura’. The literal translation of this is ‘flowering tail’. The name is appropriate because of the flowering manner. This consists of a spathe and the spadix, on which the flowers are found. The manner in which it flowers defines that the Anthurium belongs to the Arum family (Araceae).

A world traveller with tropical roots

Anthurium has a stronger link to Colombia than to Greece. Its exotic appearance actually gives it away; the Anthurium originates from the rain forests of Colombia. The Austrian doctor and botanist Dr. Karl van Scherzer had the honor of finding the first species of Anthurium. Not entirely surprisingly the botanist named this species after himself, namely Anthurium Scherzerianum.

Let’s now jump to the present day after this history lesson. The first species to be found, Anthurium Scherzerianum, is still the best-known Anthurium species. This type is also called the flamingo flower plant. As you may have already guessed, this plant is available in bright pink. As an added bonus, they are also available in other bright colors, such as orange and purple.

The second species, anthurium andreanum, is also known in Dutch as the ‘painted Anthurium’. This species has many of the same qualities as the flamingo plant. It therefore won’t be a surprise (if you are Dutch) to see, that in contrast to the flamingo flower plant, Anthurium Andreanum has an unmistakable, almost plastic-like painted glossy spathe.

The Anthurium Andreanum can additionally be distinguished from the flamingo flower plant by the way it flowers. In the flamingo flower plant, the flower consists of a round or egg-shaped spathe with a thin, curled spadix, while the Anthurium Andreanum has a thick, straight spadix. This plant is absolutely the right one to give to your love, as the spathe is distinctively shaped like a heart.

Anthuriums are not only beautiful, but they also ensure a healthier environment. The plants remove toxic substances such as benzene, formaldehyde and ammonia from the air. They exude substances that kill moulds and viruses thus keeping us healthier. But that’s not all! Anthuriums also result in an increase in concentration and the ability to learn, because they convert carbon dioxide into oxygen. ‘Last but not least’, the humidity of the air is also increased resulting in fewer problems with dry skin, eyes and lips.

At home in any environment

But there’s more, because there is so much choice in terms of the wide variety of colors. The color range runs from pink, orange, purple, yellow, to salmon and even brown and black. You could even go for a more spectacular look and choose a variety with multi-colored flowers.

Now you’re sure to have become enthusiastic and want to buy Anthuriums for your home as soon as possible. Fortunately they are available all year round, from garden centres, supermarkets, and plant shops and, of course, the florist. 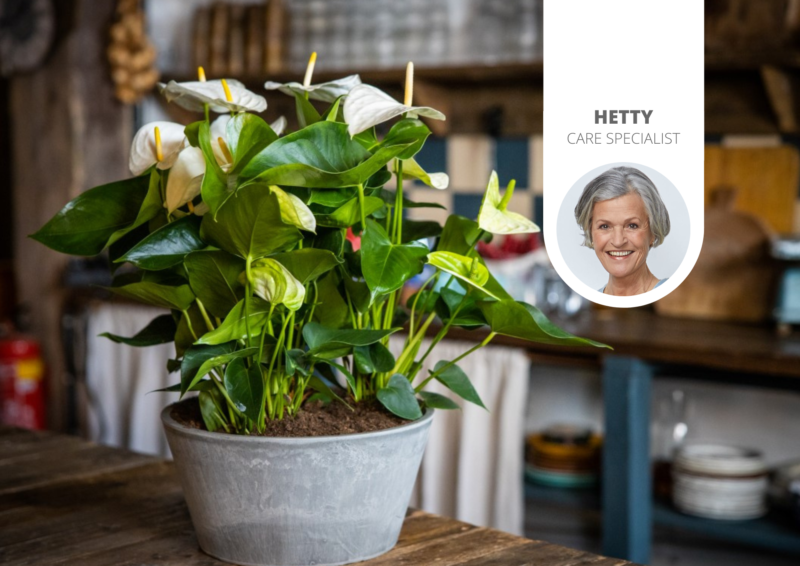 You can see a lot from the leaves of an Anthurium plant. Do they have a yellow glow? Then your plant is probably getting too much sunlight and needs to be moved further away from the window. Does your Anthurium have drooping leaves? Then you probably watered it too little or too much. Read our tips in this article!

How to use Anthuriums to wrap gifts beautifully
5 striking vases that set the scene for cut anthurium flowers
Give your home a spring update
A flower arrangement using cut Anthurium flowers: 3 examples

What to do if the leaves of your Anthurium become discoloured?
Get more out of your Anthurium plant with these ideas
How to prune an Anthurium pot plant
Which plants will grow in water?
We use cookies to ensure that we give you the best experience on our website. If you continue to use this site we will assume that you are happy with it.Ok